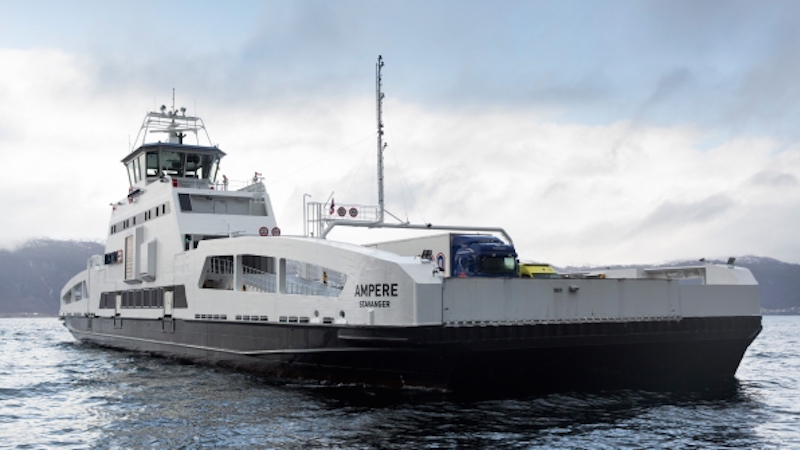 Ampere, a Norwegian battery-powered ferry, was awarded the prestigious recognition of “Ship of the Year” at the SMM trade show last September 2014.

Based on records, it is the world’s first all-electric battery-powered car and passenger ferry, a feat considering its size. It is in operation 365 days a year, with a capacity of 120 cars and 360 passengers, and travels at approximately 10 knots.

Indeed, the days of the black smoke-generating, oil-burning ferry may well be in the past soon with the success of the Ampere. The battery-powered vessel was originally an entry to a competition conducted by the Norwegian Ministry of Transport. Its water-friendly, planet-friendly design not only won the competition but it was also granted a 10-year license for operations in the Lavik-Oppedal route starting in 2015.

According to CEO Mario Azar of the Siemens Business Unit Oil & Gas and Marine, “We are both optimistic and excited about this technology and how it will help shape the future of environmentally friendly maritime technology.” He further stated that the company was pleased to apply its expertise in various fields including electric propulsion systems into the project.

Siemens engineers applied innovative building processes in the construction of the battery-powered ferry in comparison with many electric vehicles. The ferry has a lightweight yet durable aluminium catamaran hull, an all-electric power train, and two electric motors with each one capable of 450 kilowatts output.

With the aluminium hull, the vessel is just as half as heavy as its steel-hulled counterparts even when its 10-ton batteries are added to the overall weight. The material also has longer durability yet lesser maintenance required than steel.

Fjellstrand, the renowned shipyard, designed and constructed Ampere while Siemens provided the battery technology. Norled owns the battery-powered vessel and named it for its 120-car holding capacity.

Both Siemens and Norled agreed to the installation of three battery packs. Each of the piers has one lithium-ion battery while another battery is board the vessel. The set-up allows for fast recharging – just 10 minutes – at the pier, with the charging stations powered by hydropower. The ferry’s consumption of 150 kWh each route equals approximately 3 days’ use of electricity in a typical household, an eco-friendly consumption considering the number of cars and passengers ferried.

Siemens has installed features and functions on board Ampere to ensure optimum energy use. First, an energy management system interface allows the crew to watch and maximize engine speed through sub-controllers for the thrusters, generator sets, and remote controls. Second, a joint working system between the switchboard, thrusters and control systems as well as the generator sets contribute to seamless and smooth performance.

Siemens has also installed BlueDrive PlusC on board the ferry. The electric propulsion system includes an integrated automation system, an integrated alarm system, and a battery and steering system, as well as thruster control.

Passengers have expressed their appreciation for the eco-friendly, smokeless operations of Ampere.

Competitors have also taken notice of the shift from oil to electric battery. Gas2, for example, has reported that the Movitz was converted at a local startup, the Echandia Marine.