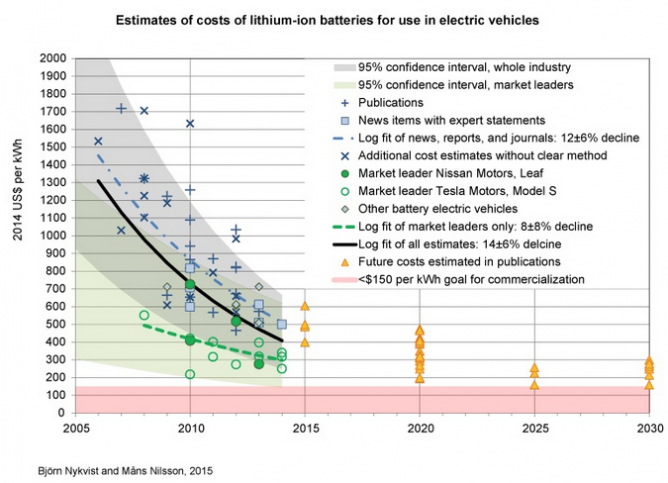 As everyone within the electric vehicle industry knows, battery costs are the biggest issue facing the wide scale adoption of electric vehicles as well as household solar systems the world over.

Batteries store all the extra energy produced by a solar system within a home in order to reduce the amount of power bought from a utility, the sad part about all of this is the fact that batteries on the whole are very expensive in every way and form.

Nature Climate Change Letters has recently published a study taken which indicates that costs associated with battery packs may be as low as $300 per kWh while it may even reach the $200 mark by 2020. Such cost reductions clearly shows a cheaper and faster reduction in costs than many in the industry expected.

Most batteries in average electric cars store around 25kWh of energy, therefore many analysts predict that costs of electric car batteries may as low as $7, 500 today, reducing to $5, 000 by 2020. These reductions in battery prices have allowed for cleaner energy systems to come and play within the mainstream markets.

A breakdown of ten studies conducted by various research institutes as well as consultancy agencies also indicated that a great fall in price regarding batteries over the next twenty tears will allow for solar power and electric cars to be much more affordable.

The new study published by Nature Climate Change Letters used 85 sources of data, namely journal articles, consultancy reports and even statements made by industry experts and analysts. The report proved that size 2011 the amount of electric cars sold globally has doubled each year.

In essence the research has predicted that the cost of a Lithium ion battery pack has already fallen to $140 per kWh within the industry, while market leading car makers like Nissan and Tesla have seen their prices drop to $300 per kWh.

The paper estimated that the entire industry is seeing battery cost reductions of 14% per annum, while market leaders who already have lower costs are seeing 8%. Predictions forecasted therefore indicate that costs for all should come together to around $230 per kWh by 2017/2018, which is seven years earlier than previously thought.

If electric car sales continue to grow at this rate, the authors of the paper are confident that $200 per kWh costs are very attainable even without better improvements within its cell chemistry.

As battery costs are reduced, it’s only natural that other technologies including EV’s and solar storage for homes will also transition from being pigeonholed items to becoming products favourable by consumers within mainstream markets.

Big market leaders are very well aware of this fact, which might just explain Tesla’s $5 billion investment in their gigafactory, which the company aims to gain economies of scale by reducing their costs even further.

With better opportunities on the horizon, another natural implication is that of competition, which may cause such technological advancements to hit the shelves even sooner. Though the other side of the coin is the fact that too much competition may turn nasty, which is the case with BASF, Umicore, 3M, and Argonne National Labs, whereby lawsuit is pending regarding patent claims for battery chemistry.

The grid may also receive better support if energy storage facilities offer better capabilities, as consumers mat use more energy produced by their own panels. By working with consumers, utilities may work on better and innovative grid technologies, which can increase the electricity mix considerably.