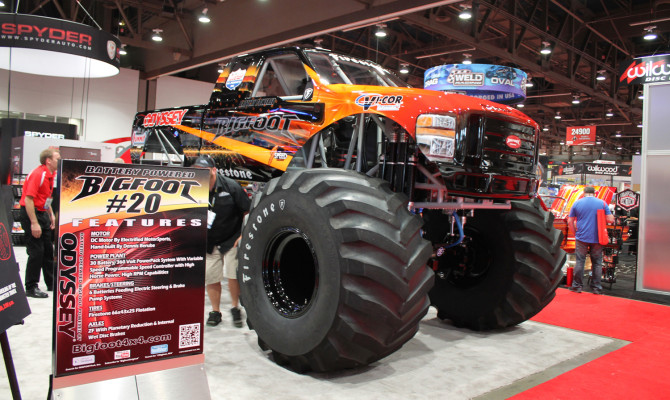 The Vancouver International Auto Show is among the best venues to find innovative car designs and the 2015 show, which was held last March 24-29, 2015 was one of the best yet.

Here, the Odyssey Battery Bigfoot No. 20 Monster Truck, which is considered as the world’s first electric truck, was introduced to the general public.

Bigfoot 4×4 Inc., one of the most famous manufacturers of monster trucks in the world, has teamed up with EnerSys in the design and construction of the electric vehicle. Many monster truck enthusiasts are now calling it E-Bigfoot.

The eco-friendly E-Bigfoot electric monster truck has all the elements of its gas-guzzling cousins. Bigfoot monster trucks are so named for a reason – these modified trucks can run over and trample cars with ease while twisting their metals, shattering their glasses, and rendering them useless except for the junkyard.

The difference between the cousins: The E-Bigfoot electric vehicle runs on electricity, not on gas. The sound of a gas-guzzler is absent, too. In all other aspects from the hulking body, chassis and tires to the flashy paints, decals and chrome accessories, the two are similar.

Dennis Berube, of Electrified Motorsports, built the DC electric motor for the E-Bigfoot electric truck. The DC motor generates 350 horsepower as well as over 800 lb-ft (1,085 Nm) of direct-drive torque, which means that it can rival its gas-guzzling cousins in terms of speed and strength.

Bigfoot No. 20 is an electric vehicle at its heart with its 36 Odyssey PC1200 car batteries, of which 30 provide power to the custom-built DC motor while 6 used for powering the steering and braking systems. The 36 batteries weigh approximately 624 kilograms, which form a significant part of the monster truck’s overall 4,990-kilogram weight.

Power is routed by the ProFab transfer case to the custom-built drive shafts and then to the ZF planetary axles. Stopping power is provided by the internal wet disc brakes.

While Bigfoot No. 20 appears to be perfect from its tires to its roof, the Bigfoot team continues to test and tweak its design before taking it to the monster truck circuit. This is an important aspect of the Bigfoot design as a dead battery in the middle of an arena full of monster truck enthusiasts can be awkward, to say the least.

According to Bob Trent, a Bigfoot Vice President, many naysayers said that the eco-friendly monster truck will never roll, much less crash the cars. But the monster truck has rolled for 20 minutes without recharging as well as proven that it can roll on top of cars, just as its gas-guzzling cousins can. This is just the start of what Bigfoot No. 20 can do and will do, Trent further asserted.

With Bigfoot No. 20, Bigfoot is cementing its reputation as a pioneering leader in the monster truck industry.