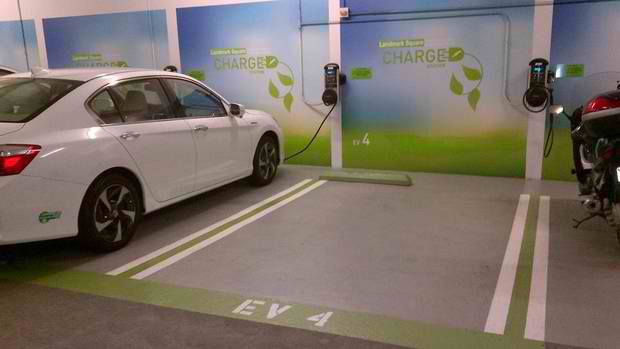 Manulife Financials Bloor Street campus have two electric-vehicle charging station ready to be introduced in order to power up a large number of green vehicles.

Such initiatives by Manulife very definitely indicate the fact that there are growing number of green vehicles being purchased, or else why offer such perks for their green adopting tenants? It has to be a proclamation of sorts regarding corporate sustainability.

Due to the popularity of the Toyota Prius as the belief that Tesla will be introducing affordable models to their line, Manulife has grown from one such stall to 145 located within 26, 000 parking lots on their 40 million sq. real estate portfolio within the U.S.

Ted Willcocks, global head of real estate asset management for Manulife added that they saw more and more tenants using Priuses, as such tenants began asking for facilities to be put in place, which is why Manulife obliged. The company looks at charging stations as a great amenity for tenants as well as for the company’s own aims at corporate sustainability.

With more than 11, 500 electric vehicles and plug-in hybrids on Canadian Roads, it’s only a matter of time before that number grows as many issues surrounding the vehicle are being simplified.

Many landlords are waking up to the fact that offering charging stations on their properties are becoming a demand from tenants as well as lower their carbon footprint. Many businesses are also moving entire fleets, partially or completely, to electric or gas-run hybrid vehicles. While building on the infrastructure needed and expanding on the network of private and larger-scale charging options, many landlords are aiding in the speeding up of wider scale acceptance regarding cleaner and greener modes of transport.

With three types of charging stations available, all cars will have an option to charge up without fear of running out of power. The three types are as follows:

Chantal Guimond, CEO of Electric Mobile Canada has stated that there are ways to ensure deployment is accelerated, such as government incentives as well as private and even public charging support. Ensuring that the correct infrastructure is installed within your home and work place is essential in ensuring success for EV’s and Plug-Ins on the whole.

Christopher Lieb, general manager for Oxford Properties, a huge landlord within Canada has reiterated that they also observed a trend where many of their tenants, where the lease allowed for, asked for Level two chargers within the parking lot for them to utilise.

As it stands Oxford Properties has around 40 stations within Canada, whereby they’re one lot shared with Brookfield Properties have 7 Level Two stations with 14 stalls. Lieb states that 70% of the spots are occupied. Valet staff keep a track of the stations and alternate vehicles that need charging which ensures that each car receives a good charge up by the end of the day. The company also has various infrastructures in place for Level One charging to take place.

Manulife followed the lead of Tech leaders within Boston and California by adding their own Level Two chargers as a way to woo tenants who employ bright spark and gutsy employees. “Tenants are looking for amenity spaces in all the buildings. Wi-Fi lounges, open networks, bike rooms, places where people socialize and congregate,” Mr. Willcocks says. “It’s providing services within the building to keep them within that building.”

Even though most drivers charge their cars up fully at home overnight, the fact that their workplace also offers charging options is an important step in breaking down the mental barriers many drivers have of running out of power. Situations whereby people have to drive 40km to work and then get called suddenly to deal with another emergency must feel at ease to know that their car will be able to charge up at work too. It adds to an overall sense of security.

Plug’n Drive has partnered with various property managers in installing the correct infrastructure, supplying the correct sourcing and acting as guide throughout the process of installation. Many commercial lots are private and are messing up the numbers says, Ron Groves, head of education and outreach for Plug’n Drive, Canada.

The company does keep a record of the number of publicly available stations there are within the country, which stands at 2, 100 stations mapped on their website. Some a free while others cost a minimal amount to use.

Many major roads such as Highway 40 have more than enough Level Three stations as part of the province’s Electric Circuit network, whose goals are to provide security to those working within heavy-travelling businesses who are looking at electrifying their fleets.

Many companies are hoping to also bring to attention to property manger’s minds the fact that their power bills are much higher with the chargers installed. AddÉnergie, Canada’s largest domestic charging station maker runs many interconnected networks allowing for the easier location of stations for drivers as well as creates software to enable the owners to manage the stations effectively.

Such software aids in reducing the amount of chagrining needed during peak hours, as it spreads the charge over a normal eight-hour working day while sharing the power to cut back the loads within the electrical panels.

Thus far, the company has installed 1, 100 stations within the public an private sector and are hoping to scale that number up as fast a possible.