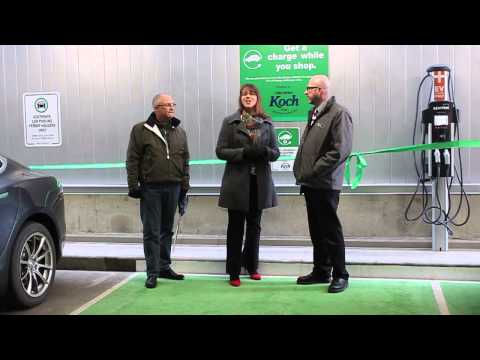 Just about twenty minutes after the announcement, and as soon as the centre’s representatives left the stations, a shopper pulled up his Tesla P85 to have it charged at one of the electric car charging station.

“This is the first time I’ve charged my car outside my house,” said Charlie Fatale, 41, the owner of the Tesla P85. He was able to get the information about the shopping centre’s electric car charging station through his mobile app. Charlie said the app invited him to shop at Southgate.

According to David Dodge, producer and host of Green Energy Futures, an estimated 108 public charging stations are installed in Alberta.  The two chargers at Southgate bring up the total to 110.

“I think it’s a great start,” said David. “But let’s face it, we’re in the early stages,” he cautioned.

“Alberta does very little for this kind of thing,” said David. “This is such early-stage technology that it’s the subsidy programs in these provinces that have led this market,” he added.

The overall cost of the two Southgate stations was $15,000. This is a lot more expensive than putting up the same facility in B.C. According to Julia Dow, Southgate’s property manager, it takes only around $5,000 to put up the same station in B.C. because of the subsidies from the government.

“That’s why this market kind of needs support in the beginning,” he emphasized.

It was the long-term partnership with Koch Ford Lincoln that the Southgate charging stations became a reality. The stations were just a “natural progression” according to Gary Hill, Southgate’s General Manager. Koch is planning to be the first electric car dealer in Edmonton.