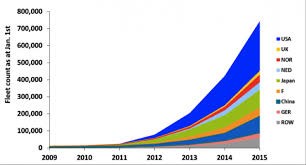 Based on the new analysis made by the Centre for Solar Energy and Hydrogen Research (CSEHR) there is a rapid growth in electric car demand around the world.

Statistics show that in 2014, there were over 320,000 new EV registrations. This would bring the total global market to about 740,000 electric cars.

This rapid rise is coupled with the strong growth performance of battery suppliers, with their total revenues reaching €2 billion ($2.17 billion). This figure is based on reports made by the same research company in Germany.

Interestingly, this tremendous growth is sparked by just a couple of companies who are leaders of the industry. They are car manufacturers that are well-known all over the world, including Mitsubishi, Nissan, Tesla and others.

Among the growth regions of the world, the US has manifested a very strong growth with a growth rate of 69%. This brings up the total number of electric cars up to 290,000 units in the USA. Practically, this means one in every three cars in the world is running on US roads.

China’s growth performance is not far behind that of the US. Its total numbers of EV registration is pegged at 54,000 units only in 2014. This figure represents a very robust 120% growth rate over the previous year.

That number definitely beats the performance of the US. It also brings the total number of electric cars in China at 100,000 units. Not to be left behind, Japan has also performed well, with a growth rate of 45%, which brings up its total EVs to about 110,000 units.

The CSEHR analysis also mentioned that fact that these three countries have good supportive policies in place. It also noted that these policies were partly responsible for their remarkable growth rates. In contrast, other countries like Germany, lacking this kind of support manifested poor growth rates.

Even so, according to the CSEHR analysis, the global market showed an overall growth rate of around 76%. It cited the fact that overall EV registrations is doubling per year starting from 2012 up to 2014.

“If the momentum of recent years continues unabated, the number of electric cars worldwide will exceed one million in just a few months,” said Werner Tillmetz, CSEHR chief of electrochemical energy technologies division.

This assessment seems to be right on the spot considering several upcoming and highly anticipated models of electric cars.

Meanwhile, in the UK, the last three years have seen a remarkable surge in electric car demand. New registrations of plug-in cars increased from 3,500 in 2013 to more than 35,200 by the end of May 2015.

Additionally, there has also been a big increase in the number of electric and plug-in hybrid models available in the UK market. Each of the 10 best-selling brands in the country is now offering an EV as part of their car line up.

With the unstable cost of fossil fuel which has developed a habit of always going up, the demand for EVs will continue to increase globally.