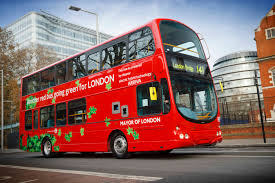 According to TfL, Transport for London, the buses have diesel that would function when battery power is low, which would only be on a very small amount of time, thus emissions would also be low. The trial for these 4 specially built buses is being financed by Zero Emissions Urban Bus System (Zeeus). At the same time, Zeeus also stands for introduction of zero-emission hydrogen buses, the addition of 800  hybrid buses, and a fleet of 6 pure electric buses.

TfL’s director, Mike Weston, mentioned that they are continuously working at ensuring that they would continue to deliver new technology that would genuinely benefit the environment. This new venture of being able to charge electric buses through the inductive charging technology is definitely a step closer to being able to offer cleaner double-deck buses on the streets of London.

On the other hand, IPPR, or the Institute for Public Policy Research, London’s thinktank, also published on the same week that other cities have failed considerably TfL’s method in tackling public transport. In fact, it has failed because the provisions led to increased fares, terrible bus services, and negative environmental impact.

Will Straw, associate director of IPPR shares that the success of public bus transport in London is no accident. In fact, he says it is a great success. Unfortunately, for those living outside of London, there is something that has to be carefully looked at with all of the results from studies that show reasons why the commuting public do not prefer using public buses.

While London hybrid bus is getting much attention on a new test where wireless charging is going to be another feature, IPPR shows another side of UK’s public bus transportation that would show that not everything in the UK gets the same treatment and handling.