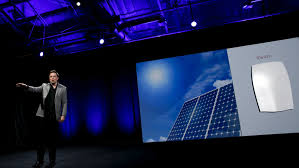 Then again, the Elon Musk battery gigafactory may soon become a threat to the business model of the utilities industry for a hundred years. The factory will be producing stationary battery packs that can work in conjunction with rooftop solar panels to be able to store power. SolarCity Corp, another company led by Musk, is packing batteries with solar panels to homes and businesses in California including the WalMart chain of stores.

Amory Lovins, Rocky Mountain Institute co-founder, said, “The mortal threat that ever cheaper on-site renewables pose comes from systems that include storage. That is an unregulated product you can buy at Home Depot that leaves the old business model with no place to hide.”

Tesla’s chief technology officer for Palo Alto, J.B. Straubel, addressed this concern by saying that Tesla views utilities not as enemies but as partners.

The Tesla battery systems come at a rather bad time for utilities. They are coming at a time when utilities are experiencing an increase in pressure around the world from the issue posed by renewable energy.

There is a fast rise of clean energy that is tax-subsidized in Germany and this has weakened wholesale prices and even eliminated the profitability of natural gas and coal plants. EON SE, the largest utility in Germany, said that it plans to spin off the business’ fossil fuel plant so they can focus on renewable energy because competitors are accessing their turf.

The traditional utility model has been threatened as the environment and energy takes centre stage at the United Nation’s latest climate talks in Lima. Delegates which are supported by environmental groups are clamouring for a draft agreement that will address climate change by reducing carbon dioxide emissions.

Lovins from the Rocky Mountain Institute has set up a solar on his home and uses it to power his EV. Now his monthly energy bill is only $25.

In the sunshine state of California,which is where 40% of the United States plugin cars were sold, half of EV owners want to install solar or currently have one in their home, based on a survey done by the Center for Sustainable Energy early last year. During that time, more than a hundred thousand plugins have been sold in the state.