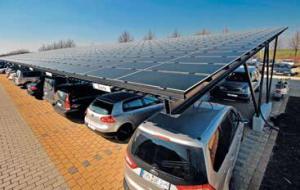 Tony Gilding, owner of Macadamia Castle, initially thought of placing solar panels on the castle roofs, but the surrounding trees made it difficult to do so. As a substitute, Smart Commercial Solar suggested a solar car park to provide “car shade” for visitor’s electric vehicles, along with the installation of an EV charging station.

According to Gilding, the solar car park was something he thought of instantly since it can be structured in the most feasible location where the sun’s energy can be most maximised. It invites strong business potential aside from environmental benefits.

Greens NSW MP John Kaye, who was at the launch, is one with Gilding’s brilliant idea of utilizing solar energy through these charging stations. He referred to the project as Australia’s example for green economy in the future. He added that over the 50 years, solar panels and EVs make a perfect match in enhancing the energy systems.

The decrease in PV prices and a change in the structure of such types of solar installations are the main reasons for the boom of the US market, considering that different sectors of society are more inclined to saving on their electricity bills.

Scott Moskowitz, author of the GTM report, commented that developers of commercial solar systems could leverage on increased customer value through larger solar projects and bigger energy savings given the decrease in market price of solar carports.

Another one to follow suit in solar panel installation this year is a transport and logistics company in Switzerland, Galliker Transport. The firm installed a solar rooftop system, structured in 2721-module grid-connected roofing, intended to shelter 2000 electric vehicles while generating 544,900 kWh of electricity. This means close to 720 MWh in the first full year, covering 100% of the energy requirements of the building.