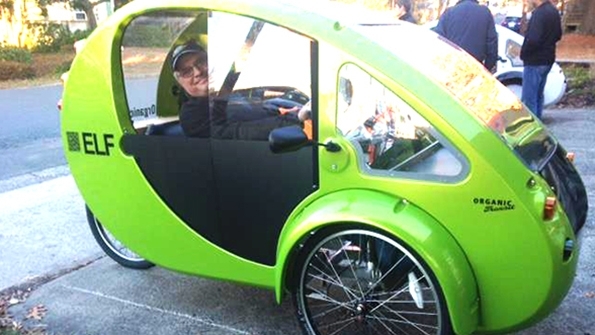 According to the creators of the Elf vehicle, this interesting looking car-bike hybrid is the future of clean urban transportation.

With an outer shell similar to the shape of an egg, the Elf looks somewhat like an inverted tricycle.

The vehicle combines solar energy charging, battery power and propulsion with pedals, making it the perfect compromise for transportation.

The low carbon Elf vehicle is three-wheeled and enclosed, however when you look inside there are no floorboards or doors.

Organic Transit, and start-up launched by Rob Cotter two years ago, sells, builds and designs the “electric, light and fun” Elf vehicle, which was recently displayed at the Consumer Electronics Show in Las Vegas.

Craig Sparks from Organic Transit said that the company believes in “human-powered mobility”.

“This [the Elf] is a town runner. You can run your errands, go to the grocery store. You don’t need a car.”

According to Mr Sparks, the Elf is “street legal’ however it requires no drivers licence, no insurance and no registration.

It comes decked out with headlights, indicators and storage space that could fit at least a dozen grocery bags.

Federal rules in the U.S., classify it as a bicycle, and it can be driven on bike lanes and paths in rail, hail or shine (okay maybe stay out of the hail, but you get the point!).

To start the Elf, an altered bike pedal crank is used, and the handlebars control the steering and braking. The battery then kicks in, and can take the car-bike hybrid up to 4o km (25 miles) per hour.

The solar panel installed on the roof of the vehicle allows it to travel up to 50 km at a time, and even more if you pedal.

Just how environmentally-friendly is it?

“There is nothing more polluting than driving our cars each day,” says Mr Cotter.

“As individuals, we are limited as to what we can effectively implement, but we can change how we behave. Getting out of your car and using your body along with a solar assist is the most powerful thing you can do.”

The creators of the Elf estimate that just one of these vehicles used instead of a car can stop six tons of carbon dioxide from polluting the atmosphere every year.

Lithium-ion batteries are are used to power the motor, and currently the pedal system and motor are operated separately. However, there are future plans to charge the batteries with pedal power.

How much do they cost?

A standard Elf will set you back about $5,500 without add-ons- the average price sits at around $7,200. According to Mr Sparks this steep price tag will pay for itself over time, as it uses no fuel.

Organic Transit has been selling this clean transport online for about a year, and they now plan to ramp up their production.

Currently around 20 Elf’s are being produced every week, and Mr Sparks said they have no intentions of selling the company to another manufacturer for mass production, regardless of their long waiting list.