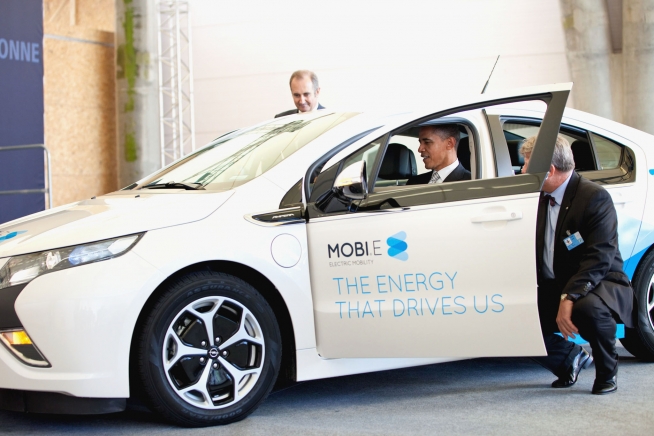 Combining incentive programs with regulations, the Federal government is pushing forward with its intent on lowering vehicle emissions on United States roads.

All car buyers looking at the display of car showrooms will not fail to notice the prevalence of cars with better fuel-economy ratings and wider choices of electric and plug-in hybrid vehicles. This is the result of the policies enacted by the present administration.

But when it comes to the Federal government buying such cars, it is a different matter. Last March, the White House revealed that it has plans to reduce greenhouse-gas emission by 30 percent by 2025 from the government’s 665,000 vehicles.

According to the Detroit News, in order to reach this objective, President Barack Obama is requiring all Federal agencies to significantly increase their purchases of electric cars and plug-in hybrid vehicles.

Federal agencies are ordered to have 20 per cent of their fleet’s cars powered by green technology, by 2020. They are also required to increase that number to 50 per cent between 2020 and 2025. Agencies with these numbers of green cars should also have the necessary infrastructure to support them.

Based on data provided by the trade group, Alliance of Automobile Manufacturers, in the first ten months of 2014, there was only less than one third of 1 per cent of electric cars that were registered by the Federal state and local government agencies.

Only around 4 per cent of the total number is accounted to hybrids without a plug. This dramatic shift required by the government is difficult to achieve given the short period of implementation.

In order to keep its goal on track, the government plans to purchase a combination of electric, hybrid, and alternative-fuel vehicles.

The current emission rules allow the government to take credit for purchasing E85 vehicles, despite that fact that most of them will never even burn a drop of E85. This type of fuel is only available at less than 2 per cent of fuel stations across the country.

This current directive is the latest attempt of the Obama government to reduce emissions from its fleets.

There are two regulations enacted in 2007 that required the government to purchase only ‘low-emission’ vehicles, and to make sure that 75 per cent of light-duty vehicles included in its fleet qualify as alternative-fuel.

Again, in 2009, the Obama administration issued a memorandum that required the government to buy lease only alternative-fuel vehicles.

Obama also required an increase on the alternative-fuel consumption by 10 percent, and gasoline consumption decreased 30 percent from 2005 levels by 2020.

And in 2011, the president ordered that all vehicle purchases of the Federal from 2015 onward be of “advanced technology models.” However, government vehicles used by certain law-enforcement applications were exempted from the ruling.