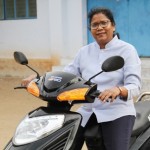 Hemalatha, 47, is the CEO and founder of Ampere Vehicles Private Limited, which specializes in load carriers, electric [...]