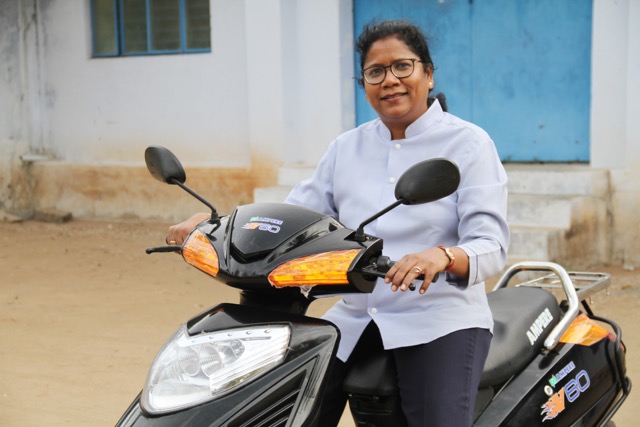 Hemalatha, 47, is the CEO and founder of Ampere Vehicles Private Limited, which specializes in load carriers, electric cycles and scooters.

According to Forbes, Hemalatha is targeting shopkeepers, farmers and rural farmers as her customer base, in tier 2 and tier 3 towns.

The local Coimbatore government has recently teamed up with Hemalatha, and now transport the city’s waste in 200 Ampere electric garbage vehicles.

It seems like Hemalatha has struck gold with this niche market- but she says it’s not about the money.

“Wealth accumulation is not my aim… I want to create a whole new manufacturing sector. I want a lot of women to come into this sector,” she said.

Already, one quarter of her 80 employees are currently women.

In 2009, Hemalatha and her husband gave up their high flying Singapore jobs to follow their dreams of becoming entrepreneurs. Their inspiration was a Japanese electric car, and since then Ampere has built over 30, 000 electric vehicles. Their revenues are currently sitting at around $1.5 million annually and expect to hit the $20 million mark in the next three to four years.

On a full battery (eight hours of charging) the electric vehicles have a range of around 40 km and can reach a maximum speed of 26 km per hour.

Hemalatha convinced the head of Tata Motors to invest in her company by telling him, “In 2000, China sold 40,000 electric vehicles. In 2015, they are selling 32 million vehicles. Why not India?”.